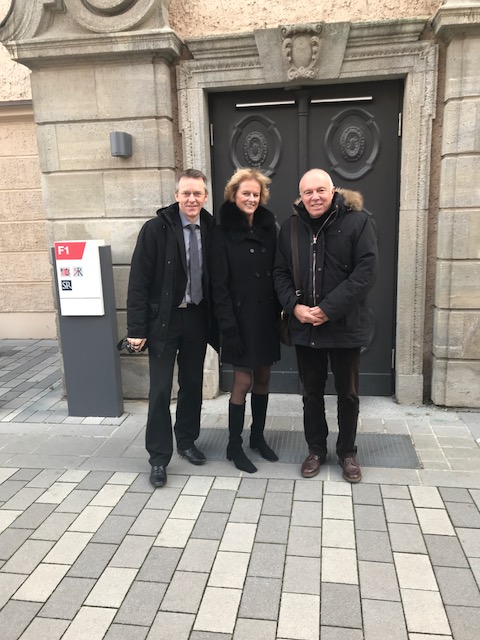 December 12, 2017, was a very special day for three Jack London scholars and teachers. On that day, as part of a residency hosted by Holger Kersten at Universität Martin Luther Halle-Wittenberg, Noël Mauberret of IAU, Aix-en-Provence, and I, representing the University of Texas-San Antonio, team-taught together as at least a “summit meeting” of Jack London experts from three countries a seminar entitled “‘The Sight of Abject Poverty’: Two Lectures on Jack London’s Writings on the Life of the Poor” in Holger’s Jack London class focusing on The People of the Abyss. Holger was the perfect host and teacher and happens to have some of the best students I have ever encountered. That day, Noël lectured on “Jack London and Economic and Social Misery,” and I spoke on “‘The Country God Has Forgotten that He Forgot’: The People of the Abyss.” Both were illustrated with London’s own photographs. Holger carefully had made sure there actually was plenty of time for questions and discussions from students and faculty there. Our lectures were co-sponsored by the university’s Muhlenberg Center for American Studies (https://muhlenbergcenter.uni-halle.de). The flyers from our talks are archived at this site. 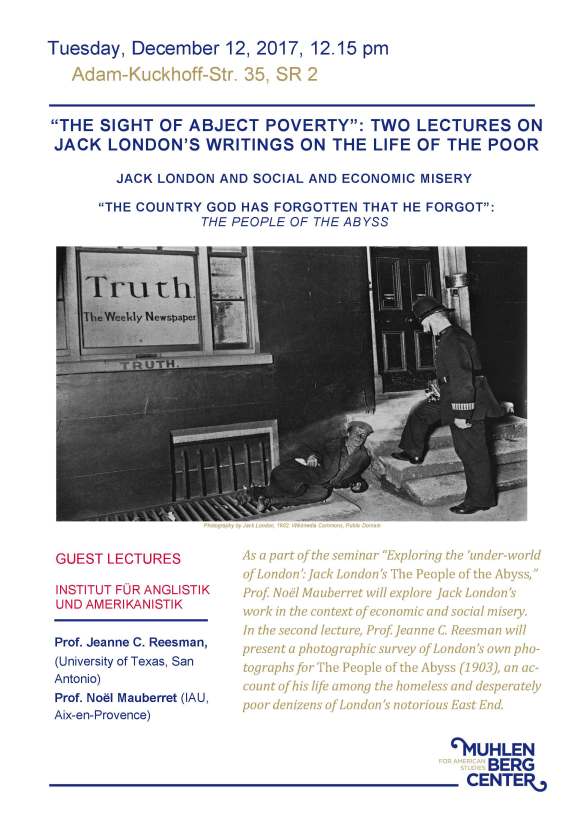 Martin Luther’s Schlosskirke is in Wittenberg, where the university that Hamlet attended was previously located. In modern times, the university has moved to Halle. They are both in the state of Saxony-Anhalt.

The day ended with enjoying the ancient town of Halle an der Saale, the Saale being the river. Built in ancient times on a huge salt dome, it was and is a source of salts sold all over the world. Opposite its 16th-century church Marktkirche Unser Lieben Frauen is the Roter Turm, a landmark Gothic bell tower. The Händel-Haus is the former home of the famed baroque composer, with exhibits on his life and music. Its cobblestone streets and the few medieval buildings not destroyed by WWII, have been carefully interwoven with reconstructed medieval to 17th-century style buildings, especially since German reunification in 1989. The city center is truly lovely, and obviously painstakingly and lovingly restored. Its Christmas Market and monuments gave us, including Noël’s wife Catherine, plenty of time to work up an appetite. Holger hosted a splendid meal with a long table of students at Hallesches Brauhaus. It was a beautiful old wood-paneled upstairs room with leaded glass windows, sconces and wrought-iron chandeliers blazing on a cold night, and a whole wall of wooden coat racks. It was just the place for Dunklebier brewed there, great game dishes and other German specialties. The best part, though, was the lively conversation among ourselves and the students. Es war sehr gemütlich. Danke, Holger!

Holger is a leading expert on Twain, Humor Studies, Jack London, and late nineteenth-early twentieth century American literature. He has published two books on Twain’s time, first in Munich, then in Heidelberg, and dozens upon dozens of articles on Twain and other writers. He has served on the Advisory Board for the Jack London Society, as has Noël—who has also served as JLS President. We mourned the death of dear Christian Pagnard, our dear friend, who partnered with Noël with so many Jack London Symposia in Nevers and Aix, and with whom he attended most Jack London Society Symposia. None of us, including Noël and Catherine, my son John and Sue Hodson, will ever forget the long-ago Sunday lunch at Christian and his wife Laurence’s little multi-storied, book-concentrated, farmhouse in Le Bourg, Saint Martin D’Huille, outside Nevers. Christian grilled a huge steak on the cast iron fireplace hob, and we had such a happy time together. Most recently Noël has added to his long list of publications on Jack London his contribution to the book Jack London dans les mers du sud: L’Odyssée du Snark, 1907-1908, by Michel Viotte and Marianne Pourtal Sourrieu, Éditions de La Martinière, 2017, to the exhibit opening in Marseille in September 2017, and of course his work on Michel’s film, Jack London: An American Adventure (2016), now available on Amazon Prime.

Holger and his wife Kirstin were the most generous and gracious hosts—both of them taking such good care of us all—though she and Holger were in the process of moving (!) and she was working many many hours at her workplace and her volunteer work within the Magdeburg community. Holger had to work around big graduate committee meetings, teaching, commuting, and a big public lecture the day I left! She and Holger had every possible thing figured out for us. But Noël and Catherine have to be named as heroic too, for they endured a week’s drive from Aix in a huge blizzard, delaying their arrival, and then when they went home to their home in the Alps, in Saint Bonnet et Champsaur, they faced another long circuitous drive and had to go to Italy to get home through a second blizzard!  And then, in only a few days, they emailed all of us to show photos of them skiing on their mountain. (Nota bene: someone should do a full interview with Noël as to his sports. He is a skier, hiker, boater, trout fisherman, hunter—and he paints.)

I arrived before Noël and Catherine on December 4, into Berlin, and basically slept all day and night. Too bad, but on my way home, I was able to have an entire afternoon and evening in Berlin. I visited the Pergamon Museum to see the ancient collections and especially the gigantic Ishtar Gate, the gate to Babylon, dug up a hundred years ago by German archeologists in present-day Iraq, blue glazed brick by blue glazed brick. You can’t get far enough away from it to photograph it, but your first reaction is to just stand there with your mouth open. I now know truly what it feels like to go slack-jawed. It is decorated with proud lions. Berlin is a beautiful city of art and history, vibrant and exciting. By the time I went home I was actually speaking German, my high school and college German (nur ein bischen) partially restored.

Holger was so kind as to pick me up in Berlin at my hotel and deliver me to Berlin the same way. On the way back to Berlin through beautiful woodlands we spotted an eagle—turns out we are both fond of birds. But Holger did a lot of driving, and his eyes were always on the road. I recall one evening he drove us back to Magdeburg from Wittenberg in a big snowstorm. I felt completely safe. Although here is where I have to say Germany, especially in the northeast where we were, is really cold. I thought, well, if a car hits us I have three coats on, two hats, and a lot of leggings, thanks to Kirstin. I will just bounce. In fact, with the coats Kirstin always sent Holger I ended up looking like a black down coat-wearing blonde bear. But we visited several town Christmas markets, and I must say, a real German bratwurst and Glugwein will keep anyone warm down to her feet.

On December 7, I lectured to students and faculty in Holger’s Dissent and Resistance class on “Adventure and Anguish: Jack London, the Hobo Who Learned Socialism in the Erie County, NY, Penitentiary” focusing on London’s two hoboing trips east in 1892 and 1894. It was a lively class, and we had a great chance to grapple not only with the historical problems of the hobo but the global “human drift” of today, as London would call it.

For me, the most exciting part of the visit was entering Martin Luther’s Schlosskirke in Wittenberg. It is one of the most beautiful churches I have ever seen, a magnificent cathedral. He is buried under the striking dark wood pulpit, but the overall feeling in the church is of light and uplift. Luther, besides his 95 Theses, had the idea of painting the interiors of Gothic cathedrals white, and I will never forget that on the very center of the nave ceiling, from altar to narthex, a curling garland of little blue flowers is delicately painted. The year 2017, in fact on October 31, was the 500th Anniversary of the 95 Theses and the beginning of Luther’s Reformation. Apparently in Berlin’s largest park and woods, there were 400,000 people there to celebrate that day.

For all of us, it was a special start to the Christmas season, to be in close company with such good friends and fellow Jack London adventurers.