Following the Moniker Trail: Hobo Graffiti and the Strange Tale of Jack London, Skysail, and A-No. 1, by Susan Phillips 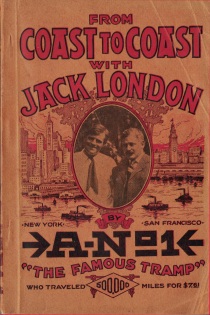 In the 20th century United States, urban graffiti has been one manifestation of what it means to claim space on the part of fringe populations. Taking over city-space is often less overtly political than it is a key ingredient in what I think of as “soul survival.” By this I mean that graffiti is not only used in functional ways that insure the physical survival of marginalized people. Writing graffiti also does something bigger: it feeds the internal self on a steady diet of insider status, special knowledge, and the communal joy in one another’s company. The importance of that usually outweighs whatever direct benefits come from the messages themselves.

← Toward a Necessary Cinema: Pietro Marcello on “Martin Eden”
Gold Fever! Deadly Cold! And the Amazing True Adventures of Jack London in the Wild, By Richard Grant; Photographs by Grant Harder →