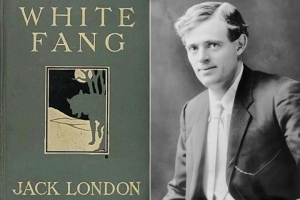 Volunteers at Pequot Library in Southport, Conn., were sifting through “all but forgotten” rare books in a storage closet for the library’s 125th anniversary recently, when they found the old copy of “White Fang.” “When we opened the book, we found London’s letter [dated 1905] taped to the inside flyleaf,” said Lynne Laukhuf, one of two volunteers who found the treasure.

The 1906 volume had belonged to London’s legendary New York publisher George Brett, and the letter informed him of the destined-to-be-classic’s progress, along with words of advice.

“‘White Fang’ is moving along and longer than I originally intended,” London typed. “It is now past 50,000 [words] and still growing. I don’t know what to think of it. I’m too close to it; but it ought to be pretty good stuff.”

The writer also warned Brett — who took over Macmillan Publishing in New York in 1896 — “If you believe in immortality, why of course there’s nothing to be said against your sweating out the rest of your life in New York . . . but if you believe, as I do that we’ve only got this one short life, and if you aren’t hard up, why you’ll up-stakes and get out.”

[Read the rest at the link]

One thought on “Jack London in the News: Lost Jack London letter from 1905 found in local library”